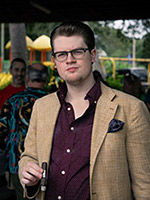 A Memphian at heart, Samuel started his pipe smoking journey halfway through his undergraduate studies at the University of Memphis. He dabbled in computer science before switching to the Japanese language program in which he learned the many cultural and linguistic conventions of Japanese language and society, while also meeting a wonderful group of teachers, exchange students, and classmates in the process. Shortly after graduation, he attended a bilingual job fair in Boston and applied for a multitude of jobs related to his interests and hobbies both there and online. We were the first ones to call him back, and in Spring 2020, Samuel joined our Customer Service team.

Samuel enjoys a multitude of odd hobbies that's left us convinced he's some sort of time traveler. Pipes are chief among them, but he also has an affinity for straight razors, old-fashioned hair care products, vintage fashion from the turn of the century, and traditional interior design. When he's not stuck in the past, Samuel loves to play the latest games, watch films, and read literature.