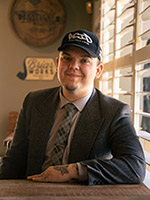 For reasons unknown, Alan's close friends nicknamed him "Gorilla" as a teenager. Perhaps it was due to a hairy complexion, or vine-swinging antics, or chest-beating exultations, but we've yet to witness any such attributes since he joined our Customer Service team in January 2022. Originally from Dillon, South Carolina, Alan moved to Horry County in 2013, fulfilling a childhood dream of living near the coast, and worked as an electrician for years before a love for cigars led him to Laudisi. An avid cigar smoker and pipe aficionado, Alan's passion for tobacco has made him a natural fit as one of our Customer Service Representatives, fulfilling orders, answering questions, and sharing informed recommendations.

Besides cigars and pipe tobacco, Alan has a strong affection for music, horror, and sports. His eclectic musical tastes range from hardcore metal to modern hip-hop and '70s soul; he's obsessed with the Texas Chainsaw Massacre and HP Lovecraft; and his diehard support of all Atlanta sports teams as well as the South Carolina Gamecocks is rivaled only by his cigar smoking — thankfully there's no inherent competition between the two. Outside of work, Alan's most likely to be found spending time with his fiancée, daughter, and pet chihuahua (the true love of his life), and he's looking forward to finally celebrating Mardi Gras and experiencing Creole culture in New Orleans on his honeymoon.