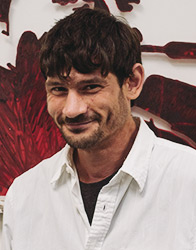 Originally from central New York, Nick has lived in several places over the years, including North Carolina, Kentucky, and Tennessee. He now calls South Carolina home, but make no mistake: he still bleeds orange. A travel enthusiast, Nick has been to 25 of the 50 States, yet his greatest adventure (so far) was when he lived in Budapest, Hungary for six months while finishing his Bachelors in Marketing from SUNY Oswego. As part of our Customer Service team, think of Nick as your man on the ground. From answering inquiries over the phone or through email, to processing orders and following up with shipping questions, he's here to help make your experience the best it can be.

When he's not at work, you'll likely find Nick at a concert. He's been to over 1,000, after all — 92 of which have featured his favorite band moe. And yes, he has met the members several times. Nick's also an avid outdoorsman and conservationist. He's even hiked the 112 miles of the Northville-Placid trail in the Adirondacks. Aside from all that, he also enjoys cooking (whipping up a 7-course meal from scratch), playing chess, reading, and enjoying a fine cigar with a nice glass of bourbon.